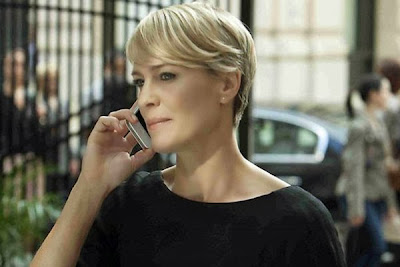 Claire Underwood in House of Cards: Likeable, no. Interesting, yes.

As I've been writing my new series, which features four different main characters, I have been thinking about ‘likeable’ heroines. One of the notes I was given on an early draft of one story was that the heroine was too arrogant ('ruthless' was also mentioned) and needed to be more likeable. And it was good advice. I wanted her to be cocky and spirited but I had gone overboard and I needed to remember I'm not writing American Psycho. The heroine of a romantic story should be someone we root for, enjoy spending time with, want to see succeeding.

But … The danger is that ‘likeable’ can tip over into ‘bland’ or ‘inoffensive’. Sometimes we’re in danger of bending over backwards to make heroines nice, humble, unassuming, downtrodden, modest, not too posh, not too successful, not too pretty. I sometimes come across this in chick lit and it makes me want to throw the book at the wall. And it feels as if this is part of a wider message that we’re given, as women, not to be too bold or confident or, God forbid, ‘bossy’ (see also: strident, feisty). To be likeable.

I’ve always thought it doesn’t really matter whether a character is likeable as long as they’re interesting. And as long as we can understand why they behave the way they do. Even if we’re writing chick lit, not Hamlet or Breaking Bad (now there are some unlikeable characters). Of course that’s the hard part. It’s easier to create a nice, humble heroine who's kind to animals; much harder to write a heroine who is messy and flawed and real, and does bad things, but who the reader will also want to spend time with.

The other point is that not everyone will like every character. For every person who thinks Carrie Bradshaw is the ideal best friend, another will think she's a self-obsessed whiner. (I happen to think she's both). You can't please all the people, all the time.

Here are some of my favourite ‘unlikeable’ heroines:

Jeane in Adorkable by Sarra Manning. This is a brilliant example of using first-person narration to get the reader onside. We can see how, to her classmates, Jeane might look aggressive and intimidating, and so mean to that nice Michael Chang … but we’re inside her head and we get it.

Octavia in Octavia by Jilly Cooper. ‘The moment I set eyes on Jeremy West I knew I had to have him.’ Jeremy is her old school friend’s fiancé, and she gets worse from there, including a memorable party where she turns up half-naked (though, spoiler alert, she does reform in the end).

Camille in Are you in the Mood? by Stephanie Lehmann. Self-obsessed, lying and conniving; I wouldn’t want to be friends with her but I found her very entertaining.

Lisa in Sushi for Beginners by Marian Keyes. This glossy magazine editor (‘hard, brittle and shiny as an M&M’) is much more fun than the ‘real’ heroine, mousy Ashling. I love her horror at being sent to edit a crappy mag in pre-Celtic Tiger Ireland – ‘the magazine version of Siberia’.